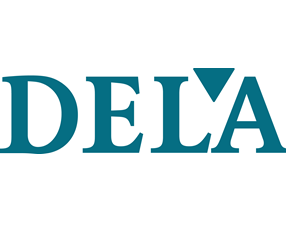 We have successfully used EVALUATE to pre-test communication concepts. Using a “narrative story” we pre-tested a commercial for the funeral insurer, DELA. The insights we identified through the EVALUATE approach generated decisive recommendations that helped to make selections for further execution and improve the effectiveness of their campaign.

The key objective of the research was to get a clear insight in the intrinsic communicative value of (1) different executions of the marketing campaign and (2) the campaign as such. Using both Brain Waves Measurement and Qualitative Diagnostic Research, we tackled four executions: “Stubborn Donkey”, “Grandma Fyring Pan”, “Supermarket” and “Doing the Dishes”. The key message of the DELA commercials was the following. The passing away of a loved one is a dramatic event. We are not able to spare this grief. The costs and worries we can. With the DELA funeral care plan you can make sure that your surviving relatives can take leave of you in all serenity, without being hindered by financial and practical burdens. The main objective of the research was therefore to create awareness and openness towards the concept of using funeral insurance.

The neuro measurement showed the following results across the different scenarios: 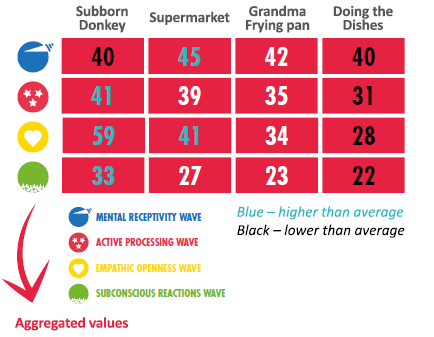 As can be seen, Stubborn Donkey scored high on three of the four waves. It is a balanced and warm story that inspires people and offers trust which is why the brand is in the consideration set. Supermarket is a surprising story in a rather banal and familiar context, but is not properly able to anchor the message at the fullest. As the general results indicate, Grandma Frying Pan is a rather neutral story, triggering neither cognitive nor emotional. Doing The Dishes, lastly, scores the lowest on all waves. This story is not able to attract attention nor to bring the brand into the consideration set. 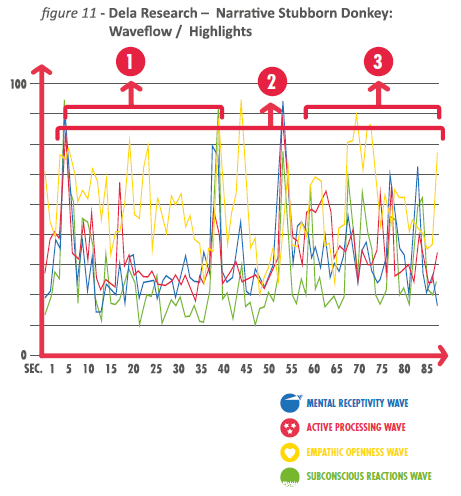 A man in his forties is standing behind the pulpit at the front of the church. With a slightly fragile voice he says:

“Mom deserves a statue for living with dad, such a stubborn person. I had my first skiing trip with school. It was years later when I leaned he had done extra shifts to be able to pay for it. The day I graduated, he came to my dorm with a small car. ‘Here, you need to move forward in life,’ he said. When we bought our house, he helped us out with the painting. And he brought his own paint! On his birthday, he asked for garden utensils, so he could come help out his children with their gardens. The last time we went for dinner together, to celebrate his birthday, he paid the bill without me noticing. So stubborn. He wouldn’t even let us pay for his own funeral. Well dad, the doctor was right. You should’ve rested more. Now you have to. Thanks. For everything.”

At the end of commercial the following message appears:

“Let good memories be the only thing you leave behind. No costs or practical troubles. With DELA’s Funeral Care Plan. DELA. Care for each other. More on www.DELA.be.”

Figure 11 shows the brain measurement as respondents listened to the Stubborn Donkey narrative. We can see (1) a high level of attention and alertness from start, (2) an overal strong emotional engagement and (3) that the final message is well captured and makes people reflect on it. Figure 12A and 12B show the AERA analysis. From the results, we are able to tell that respondents feel involved in the story, from beginning to end. Noticeable is the high “Empathic Openness” brain wave. Respondents are very focused on the story that is being told. At the end of the story the brain wave pattern goes up, particularly the “Active Processing” and “Empathic Openness” waves. This indicates that the consumer action that DELA is communicating at the end of the commercial (i.e. “more on www.DELA.be”) is being positively received and that respondents are open to DELA’s call to action.

Strong attention as from sec. 3-5 (Standing behind the pulpit and speaking) is an indication of strong relaxed alertness. the high subconcious reactions wave shows not only curiosity but also the fact that it inspires people on a subconscious level.

(A) Sequence 11″ – 33″ (“Mom deserves a statue for living with dad”) is the sequence in which the story about the “Stubborn Donkey” is told. Evolkes deep basic emotions of warmth and respect. Strong empathic attunement. (B) Sequence 36″ – 44″ (“When we bought our house, he helped us out with the painting. and he brought his own paint!”): Emotional comprehension, care and empathy as central emotions. (C) Sequence 51″ – 53″ (“he paid the bill without me noticing. So stubborn.”): Waves show identification but also a feeling of positive surprise. (D) Sequence 67″ – 72″ (“A voice says: only leave good memories behind”): Indication of empathic attunement with strong active resonance.

Dominance of empathic openness wave untill the end indicates openness and receptiveness for the final message.

The sequence (“no extra costs with DELA … More on www…) indicates people’s receptiveness for the information next to the fact that they are willing to think about it or reflect on it. 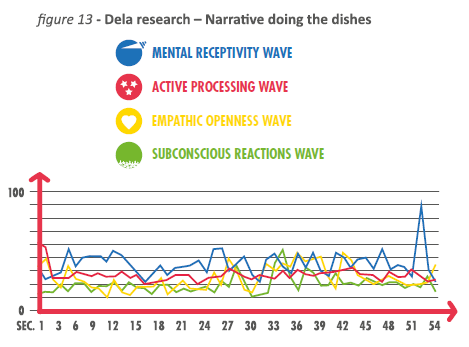 A couple is doing the dishes. He washes plates, she dries them. They are talking about their daughter that apparently didn’t have a good report card and how they would discipline her. When he passes a plate to her, the plate hits the floor. His wife is no longer standing next to him.

An off screen voice continues:

“You are never prepared for the passing away of someone you love. That’s why DELA makes sure that relatives are immediatly looked after and guided. All practical matters and the funeral are fully arranged. So if you’re no longer here tomorrow, you family won’t be left on their own.”

DELA’s Funeral Care Plan. DELA. Care for each other. More on www.DELA.be.

So, what did you think of the narrative? Here are the overall conclusions that the EVALUATE team learned from the narrative. “Doing the dishes” fails to sufficiently meet the aims of the campaign, particularly when compared the “Stubborn Donkey” alternative. The link with the baseline remains vague, making it unlikely that the commercial will enhance the popularity of the brand. The “Doing the dishes” narrative evoked little emotional involvement compared to the “Stubborn Donkey” narrative. The narrative does not engage respondents to be open-minded about death and the use of funeral insurances. The story is less inspiring and more traditional than “Stubborn Donkey”. The respondent appears to be somehow perplexed by the outcome. So, at the end of the narrative, we noticed that respondents are not open to receiving or acting upon the message. 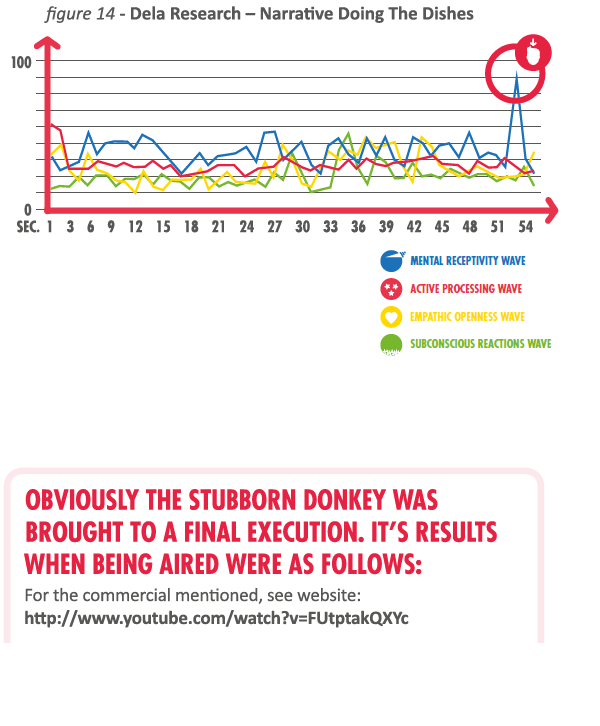